New 'age-progression' photo of baby who disappeared from crib released 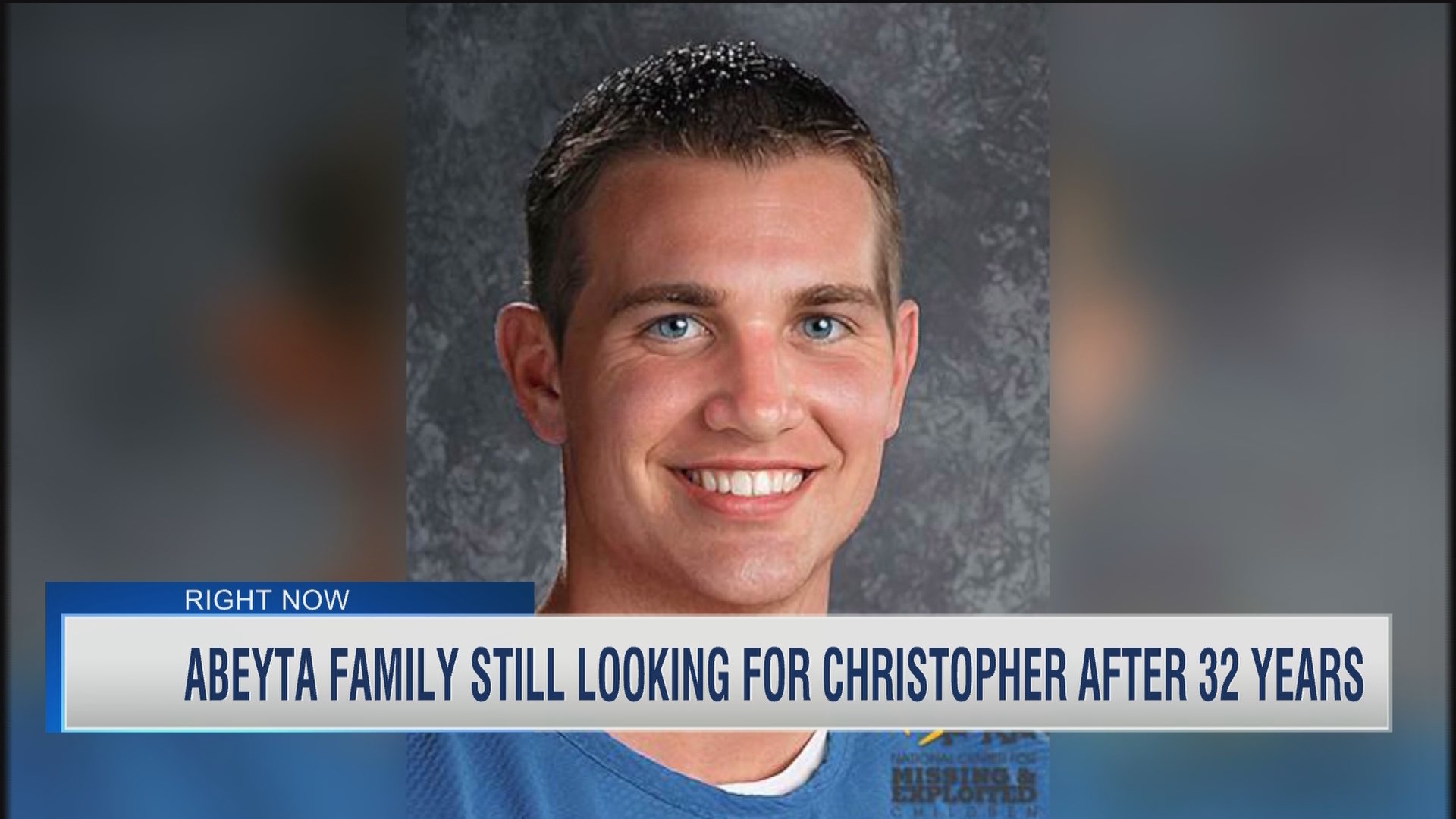 COLORADO SPRINGS, Colo. (KKTV) - UPDATE (7/13/18): A new "age-progression" photo of a Colorado Springs baby who was reportedly kidnapped was released this week.

It has been nearly 32 years since Christopher Abeyta was discovered missing from his crib in Colorado Springs. Despite the time that has passed, family and community members continue to search for answers.

In 2017, Christopher's mother, Bernice Abeyta, lost her battle with cancer. Until her dying day, Bernice believed justice would be served for her son Christopher.

Bernice died in her Colorado Springs home surrounded by family.

Missing and Exploited Children shared the photo on Thursday, which can be viewed at the top of this article. If you have any information on Christopher's disappearance you're asked to contact the Colorado Springs Police Department at 719-444-7000.

Tonight, we're releasing a new age-progression of what #ChristopherAbeyta may look like. Do you recognize the face?

He disappeared from his crib on the night of July 15, 1986 in #Colorado. Read a heartfelt letter that Christopher's sister wrote to him �� https://t.co/m3xIBF7zXA pic.twitter.com/HELPygbAUu

"When Christopher disappeared it was like I lost my future. I lost the beginning of our life," said Bernice Abeyta, Christopher's mother.

July marks three decades when Christopher, who was just seven months old, disappeared from his crib in Colorado Springs. His parents were sleeping just feet away.

"One big thing the kidnapper has over us is they have the surprise; they know when they're going to do it. We don't," said Gil, Christopher's father.

The Abeytas say Christopher was kidnapped — snatched from their bedroom in the middle of the night. Since then, the case has gone cold with no named suspects — and no answers.

As outlined in the lawsuit, the family believes the person who took him is the father's former mistress, Emma Bradshaw.

The Abeytas has been outspoken about their suspicions over the years. And just recently, Bradshaw sued them for defamation and won. Police have never named her as a suspect.

"My parents have said their greatest fear is that they won't have answers before they die and now she's facing this right in front of her," said Christopher's sister, Denise Alves.

Alves said her mother's recent terminal cancer diagnosis makes the urgency and desperation of getting an answer that much bigger.

"I plea with them to come forward now so my mom can have some peace," she said.

Bernice said the diagnosis wasn't easy, but she's ready for whatever is ahead.

And she wants her six other children not to be defined by what happened to their brother.

"This was one very devastating thing that happened in our family, but there was life before and there is life after. And you have to be careful not to be controlled by this one devastating thing," Bernice said.

Even if Bernice doesn't get the answer she wants before she dies, she's confident justice will be served.

An age progression photo was released several years ago showing what Christopher would look like today. There is a $100,000 reward for information that leads to an arrest.

If you have information, call the National Center for Missing and Exploited Children at 800-THE-LOST.

Standoff in east Colorado Springs comes to an end

MISSING: 11-year-old Colorado boy last seen June 28, allegedly taken by his mother who just got out of jail

Standoff in east Colorado Springs comes to an end

MISSING: 11-year-old Colorado boy last seen June 28, allegedly taken by his mother who just got out of jail