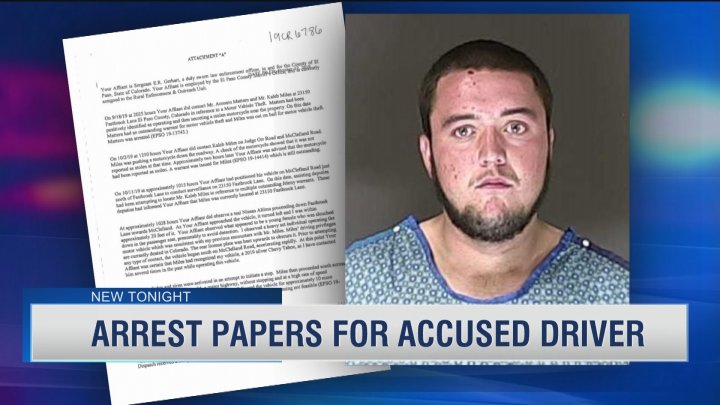 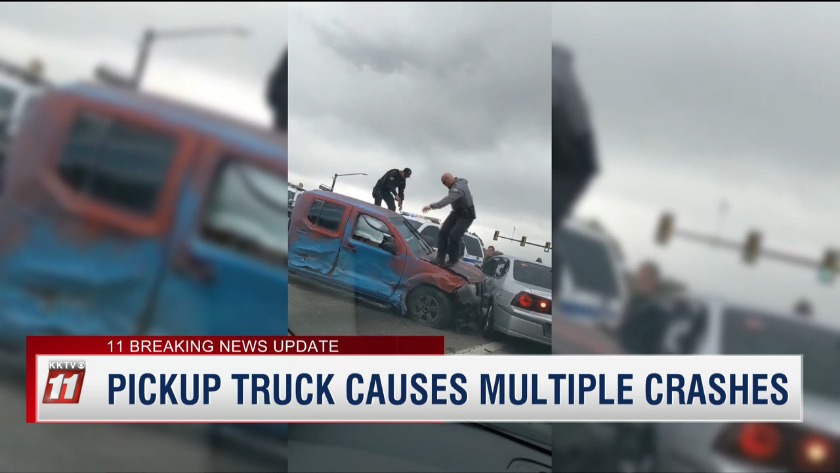 Police identified two suspects in the crash as Kaleb Miles and Brooke Macklin.

Multiple roads were closed in northeast Colorado Springs for police activity Friday afternoon. Police are seen on video swarming a truck with guns drawn soon after one of three crashes in a long chase.

11 News obtained arrest papers for Kaleb Miles that say he had allegedly stolen the truck that was crashed from a woman two days before the chase. Deputies responded to a a carjacking on October 16, 2019 at the Loaf n' Jug convenience store on Space Village Ave. Investigators say the woman was parked near the gas pumps when she was confronted by a man with a sawed-off shotgun.

Jacqueline Kirby, the public information officer with the El Paso County Sheriff's Office, saidFriday's pursuit started at about 1 p.m. near Blaney and Garret Road. It crossed from county territory into city territory before multiple crashes. Speeds reached about 60 mph.

Several bystanders and deputies were taken to the hospital with minor injuries. A total of four deputies were involved in the crashes.

Before the pursuit, the sheriff's office got a report the suspect was drilling a hole in a vehicle to try and siphon the gas out of it.

Macklin had an active Failure to Comply warrant.

Detectives are also calling Miles the suspect in an attempted carjacking that happened on October 15, 2019 at Walmart Neighborhood Market in Colorado Springs. In that case, a man approached an elderly couple in the parking lot with a shotgun and tried to steal their car. The couple refused to hand over the keys, and the suspect reportedly fired a shot into their bumper.

The sheriff's office explained why the pursuit spanned miles:
"In reference to the pursuit on Friday, October 18, 2019, we were looking for a suspect with numerous felony warrants and it is believed he is a possible suspect in at least one violent crime. That information was not disclosed at the time of the Media Briefing as we were still waiting for details to be confirmed and the pursuit that afternoon began with the suspect stealing gas. As with any case, the release of information will happen when we are confident the release of said information will in no way compromise the integrity of the investigation."

Arrest papers obtained by 11 News connect Macklin to an attempted motor vehicle theft where the suspect fired a shot at the victim's car.

RAW VIDEO BELOW WITH GRAPHIC LANGUAGE AND IMAGES:

LANGUAGE WARNING: Here’s that truck crashing through Austin bluffs and Academy, video given to me by someone involved in the crash. Heading to the media briefing now for more information. pic.twitter.com/5Qn9Onee42