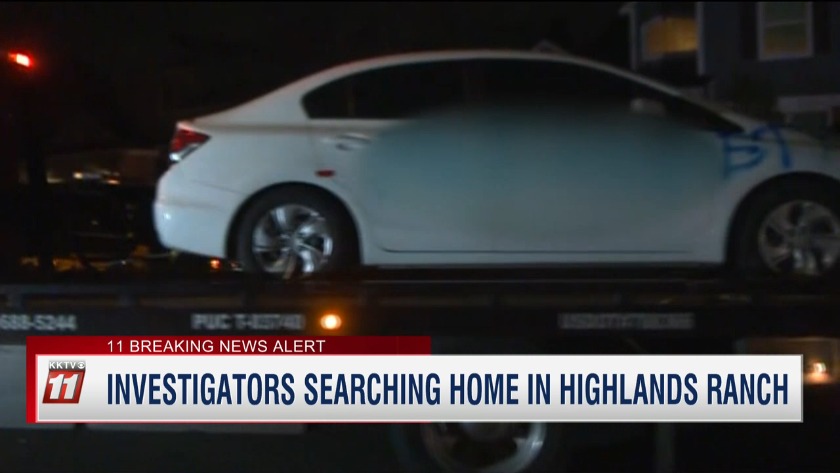 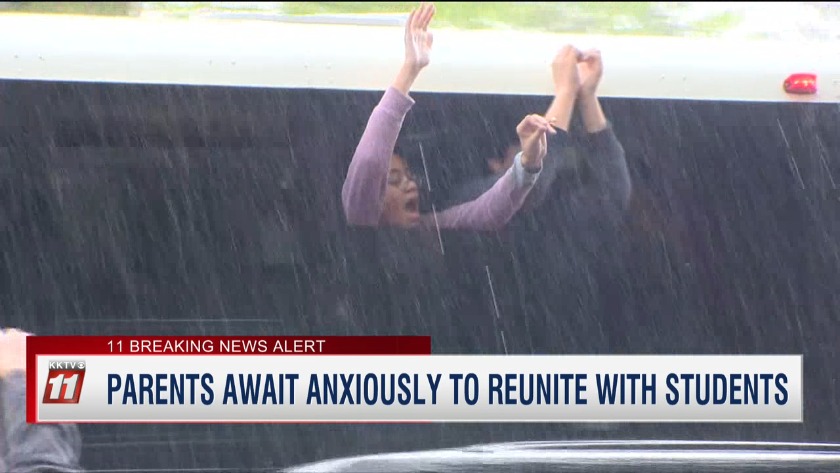 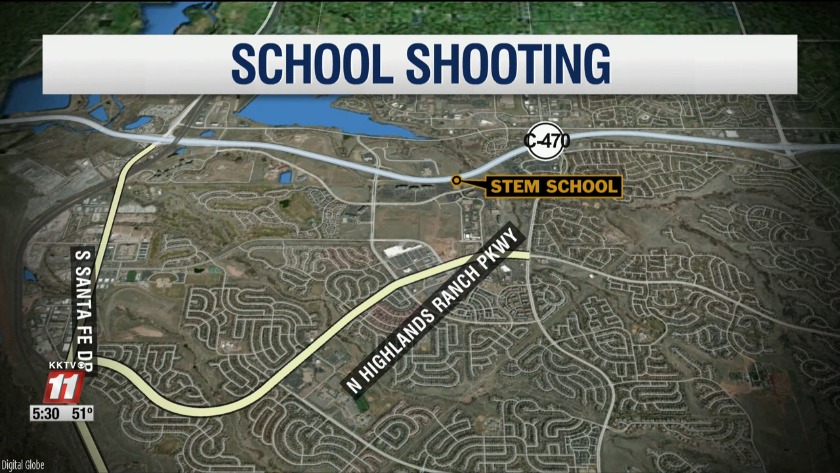 HIGHLANDS RANCH, Colo. (KKTV) - UPDATE (11:30 a.m., 5/15): The younger of the two shooting suspects will be tried as an adult, prosecutors decided Wednesday morning.

Parents and students comfort each other after a shooting at STEM School Highlands Ranch on May 7, 2019.

Devon Erickson at 18 was already facing a slew of charges as a full-fledged adult, but there were still question marks around his alleged accomplice, who is 16.

Both teens made court appearances Wednesday morning, where they were officially charged. Erickson faces 48 counts, including first-degree murder after deliberation, arson and burglary charges. The younger suspect's court documents have not yet been made public and cameras were not allowed in the courtroom, so his charges are still unclear.

UPDATE (10 a.m., 5/15): The two students accused of shooting up a STEM school in Highlands Ranch are both in court Wednesday.

The May 7 shooting left one dead and several hurt. Students Kendrick Castillo, Brendan Bialy and Joshua Jones are credited as heroes for lunging at the shooters, taking bullets in the process. Kendrick lost his life protecting his classmates.

UPDATE (5/8, 3 p.m.): An 18-year-old boy is being hailed a hero for rushing one of the gunmen and taking three bullets to save his fellow students.

"I want to make something very, very clear: Kendrick Castillo died a legend," said Brendan Bialy, one of the students who disarmed the shooter.

In the terrifying moments between the first shots fired and the first deputy's arrival, it came down to three young men against a gun.

"What I saw yesterday was the absolute best of people. I got to see two heroes, two regular high school kids, two really awesome people jump into action without any hesitation, and I was more than lucky to join them in doing that action," Brendan said.

Brendan said there was no hesitiation on his or his classmates' part.

It was Kendrick who first lunged at the shooter.

In the scuffle, the gunman got off a couple of shots, hitting and killing Kendrick. Brendan eventually grabbed the gun.

"When he was shot and I saw him on the ground ... and once the other student who was helping us there was still on top of [the shooter] and he was done, and I had his handgun, I kept it in a safe direction and I went over to Kendrick and I gave him multiple verbal commands, questions, and he was not responding, and then once a teacher came in I tried my best to assist with that.”

John and Maria Castillo called their only child "extraordinary."

"I’d like the world to know that this wasn’t your average kid,” John Castillo said.

The grieving parents said they learned their son was killed when they went to the hospital looking for him.

"I was texting and I tried to FaceTime him, and I was getting nothing and my anxiety and my lump in my chest was growing. I just couldn’t believe it, I couldn’t believe that this was happening to my son," Castillo said.

Kendrick's family and friends say he died a hero.

"I know that because of what he did others are alive and I thank God for that. I love him and he is a hero and he always will be," his father said.

UPDATE (5/8, 2:33 p.m.): Shackled at the waist and hair covering his face, the older of the two suspected gunmen in Tuesday's deadly school shooting made his first appearance before a judge.

Devon Erickson, 18, could face as many as 30 charges for allegedly shooting eight of his classmates at a STEM school in Highlands Ranch, including first-degree murder and dozens of attempted murder counts. Charges will officially be filed Friday.

Erickson kept his eyes fixed downward as he sat in the courtroom, only nodding in response to the judge's questions until forced to give a verbal answer to one.

Erickson will return to court Friday. Law enforcement are still deciding whether his alleged accomplice, a 16-year-old girl, will be charged as an adult.

"I want to consult with more of the victims; thus far, we’ve had the parents of the deceased here … I told them that before I made a decision, I'd have further discussion with them. This decision usually accompanies charges. I haven’t made a decision on charges yet; I want to get more investigating done before I make that decision. Once we got all that together, I'll reach out to victims, have a discussion and I'll make a decision," said District Attorney George Brauchler.

We learned from the Douglas County Sheriff's office that the second suspect was a juvenile female, not a male as previously reported by authorities. The other suspect is an adult. Both suspects were students at the STEM school. The Sheriff says they do have search warrants for the homes of both suspects.

Investigators will be out for the next two days sifting through the crime scene and investigating what led up to the suspect's motive in this shooting.

Sheriff Spurlock said his deputies did not exchange gunfire with the suspects. He said one of the suspects was already restrained by a security officer when deputies arrived at the school.

Our sister station in Denver reports the victim is 18-year-old Kendrick Castillo. Douglas County Sheriff, Tony Spurlock, says he would have graduated and been out of school in three days.

Five students have been released from the hospital. Three students are still in intensive care, according the sheriff's office.

Sheriff Spurlock has asked that the community come together to be strong and pray for the family of the student who died and the eight other students who were injured.

We will continue to update this article as more information becomes available.

Watch below as authorities give a live updates on the STEM school shooting.

Our sister station in Denver, KCNC, is reporting 18-year-old Kendrick Castillo was the young man killed in the shooting. According to our sister station, Kendrick had a love for technology which was his focus while attending the STEM school.

The Douglas County Sheriff's Office is expected to hold a news conference at 6 a.m. Wednesday to update the investigation. Watch 11 News This Morning for live coverage as soon as it happens.

Officers were still hearing gunshots as they responded to a school shooting in Colorado Tuesday afternoon that left one student dead and more than half a dozen other students injured.

At about 2 p.m. the Douglas County Sheriff's Office asked the public to avoid the area near STEM school at Ridgeline and Plaza in Highlands Ranch. Highlands Ranch is a suburb just south of Denver. As of 4:50 p.m. authorities were reporting eight students were injured. Several of them were in "critical" condition.

The sheriff's office clarified how many students had been shot at about 9:30 p.m.

"To confirm any confusion, there were eight students injured and sadly 1 student killed," the sheriff's office posted to social media.

11 News crews were on scene outside a Highlands Ranch home authorities were searching. It is believed to be the home of Erickson. A vehicle was towed from the home that had the words "F**K SOCIETY" written across the side.

There are reports that one of the suspects used a guitar case to conceal the gun before he pulled it out and starting shooting.

In the last public update Tuesday, it appeared only two suspects were involved in the actual shooting. The sheriff's office said this was an "unstable situation" when it first started unfolding.

The school has more than 1,850 students in kindergarten through 12th grades.

“We are making all of our public safety resources available to assist the Douglas County Sheriff's Department in their effort to secure the site and evacuate the students. We are monitoring the situation in real time. The heart of all Colorado is with the victims and their families.”

For Parents: STEM Students can be picked up at Northridge Recreation Center at 8800 S Broadway, Highlands Ranch, CO.

The FBI and ATF are aiding in the investigation.

The next public update is scheduled for 6 in the morning on Wednesday.